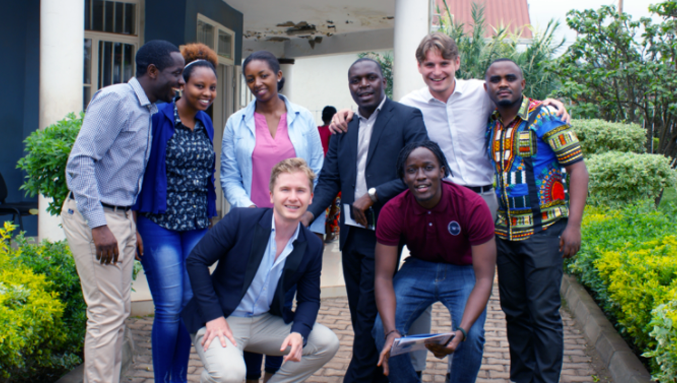 Picture this, it’s early 2020 and a group of entrepreneurs in Helsinki have a moment of epiphany. They have in mind the idea of starting a groundbreaking initiative. An initiative that aims to unite young talents from two different regions of the world through education, entrepreneurship and entertainment. A name for the initiative is chosen. A date and venue for the launch is picked. A continent wide tour in the offing. Then without any warning all these plans come to a screeching halt. The culprit? Yes, you guessed it right! Covid-19.

The following is the neat story of how a young initiative is leveraging digital technology for growth in a time of crisis.

The above story is not fiction, it was the quagmire that the firestarters of Ambitious Africa found themselves in. They had come up with the pioneering idea of starting an initiative that brings together young people from the Nordics and various African countries. An Ambitious initiative hence the name Ambitious Africa. These members of the Finnish startup community had already hit the ground running through various initiatives such as Grassroots lead initiative Slush, Startup Sauna Safari and startup incubators in Rwanda, East Africa called Envisage Incubators. However, they were now aiming for something bigger and bolder. The roadmap of the launch was clear. The official launch of the initiative was to be on 25th of May 2020 as a side event to the Arctic 15 event. The legendary venue Tavastia in Helsinki was to play host to this launch. Followed by visits to various African countries to establish networks with local stakeholders.

At the same time, the founders of Ambitious Africa were organizing an accelerator program for students in collaboration with Hanken Entrepreneurship Society. Then Covid-19 pandemic hit the world like a Mike Tyson punch. National borders were quickly shut, schools closed their doors, social events declared illegal, social distancing became a vital survival tool and society retreated into the safety of their homes. The founders of Ambitious Africa saw an opportunity and quickly seized upon it. Inspired by different hackathons around the world, they teamed up with some students from Hanken and virtually organized a hackathon on the 3rd of April 2020, with the aim of enabling solutions creation for the consequences of the pandemic.

The hackathon named What The Quack ran for forty-eight hours long and brought together 250 participants from 22 countries including four African countries. This Hackathon partnered with Deal Room Events, a Finnish online event management company, and utilized their digital platform. The hackathon was a runaway success and it was a light bulb moment for the team.

Despite normal life coming to a halt, business could continue virtually.

The team then immediately embarked on leveraging digital technology to launch the Ambitious Africa Initiative. Most people had to stay at home and they were virtually available. Based on the connections they had in Rwanda through the Envisage startup incubator, they quickly created an Ambitious Africa Rwanda national team. On the 23rd of April 2020, a mere twenty days after the What The Quack hackathon. The first Ambitious Africa National Day event was held online bringing together stakeholders from the Nordics and Rwanda. The digital formula worked like a charm.

All these activities laid the groundwork for the official global virtual launch of Ambitious Africa on the 25th of May 2020. Previously intended to be held at the Tavastia club Helsinki. The online global launch brought together stakeholders from fourteen African countries. A thousand people registered for the event. In June 2020, Ambitious Africa is launching in Egypt, Zambia, Nigeria and Namibia.

Since the pandemic hit the organizers had hosted 14 events from living rooms and Mökki’s (Finnish for Cabin). It was of course a unique experience, but it also came with challenges. They then decided that in order to further scale up their operations they were in need of digitally-driven headquarters that also would grant access to a community of change-makers. Since the first Ambitious Africa meetings had been held on Epicenter it became an obvious co-working space to start in. And they were welcomed with open arms.

When it comes to networking in Africa, Ambitious Africa is the go-to team. With a strong and growing footprint in African countries, Ambitious Africa has the muscle to connect businesses and investors to the right organizations and people in these markets. Epicenter allows the initiative to meet with driven peers in an inspiring environment. For Ambitious Africa the Nordic network is now growing bigger, bolder and better.

Their team is always looking for new and exciting future cooperations. If you would like to hear more about potential opportunities with Ambitious Africa, contact victor@ambitiousafrica.org.

Or do you want to become a part of Epicenter’s community of digital startups, scaleups and entrepreneurs? Come and see us, and we’re glad to show you around! Just fill the form below and we’ll be in touch with you shortly.